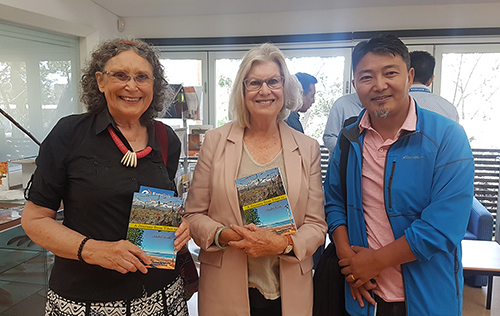 Literacy Network was represented by Robyn Smith, (coordinator) and Lynsey Chandler (president) at the launch of the report on the Northern Beaches Tibetan Community Research Project.  The project, was initiated by Maria Elena Chidzey, Manager of Multicultural Settlement Services at Community Northern Beaches Inc, an independent not-for-profit organisation, and carried out by Macquarie University and funded by the NBCC.

Many members of the Tibetan Community participated in various roles. The CNB Multicultural Service is the only funded service assisting refugees and others in our area, and collaborates with a range of service providers to empower people to build their community through conversation classes, driving and swimming programs, and more.

State MP James Griffin and Councillor Candy Bingham attended, as well as the Secretary of the Tibetan Community Council and representatives of local organisations.

Members of the Tibetan community contributed directly to  the project as translator, graphic designer and photographer. Many helped as facilitators, and nearly 200 participated in consultation groups. Five people shared their life stories.  The resulting report is a fascinating picture of a vibrant community that lives with us and quietly contributes a huge amount to our community and theirs. Literary Network has several copies of the report in our library